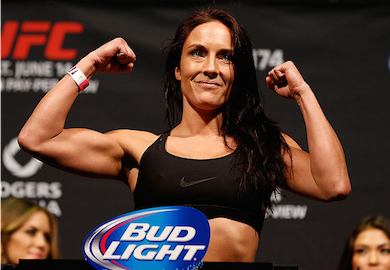 Bantamweights Valerie Letourneau and Elizabeth Phillips met in the octagon tonight and slugged it out for fifteen full minutes.

Phillips cracked Letourneau with a lunging right hand that landed just below the left eye early on in the first round. Immediately after absorbing the punch, Letourneau reached for her face and winced in pain. Her left eye would go on to swell badly throughout the fight and it is believed she suffered a fractured orbital.

Despite suffering the injury, Letourneau pushed through the pain and kept pressing the action. The high-volume offense of Letourneau caused Phillips to gas faster than she normally would and her punches became labored halfway through the second round.

Phillips showed desperation in the opening moments of the final round when she shot for a takedown. Letourneau stuffed it with ease and countered it with a nice knee to the face of Phillips. From that point on, she continued to outwork Phillips and dominate her with combo after combo.