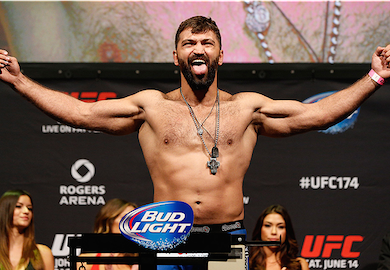 Heavyweight Andrei Arlovski made his return to the octagon tonight against ‘Big Brown’ Brendan Schaub. A victory over #14 ranked Schaub will likely get Arlovski a spot in the Top 15.

The opening round was slow-paced as both men respected each others power. Arlovski looked for the clinch against the cage often, wanting to drain the gas tank of Schaub. He would get him up against the cage but would not work at all; it was more of a break for him than anything. When Schaub finally escaped, he would throw off a thunderous combination that barely missed every time.

It became clear in the middle of the fight that Schaub was growing frustrated with the lack of action from Arlovski and he started to swing for the fences. The punches could be seen from a mile away and this allowed Arlovski to dodge his offense easily. Schaub landed a stiff uppercut to the jaw of Arlovski, but Arlovski ate it and did not wobbled one bit.

Schaub did a great job at neutralizing any offense Arlovski was tying to dish out and beat on him for the entire third round, seemingly locking up a decision victory after the fifteen minutes expired.

When the judges’ decision was announced, Schaub and the crowd voiced their disapproval when Arlovski’s hand was raised. It was a controversial decision to say the least.