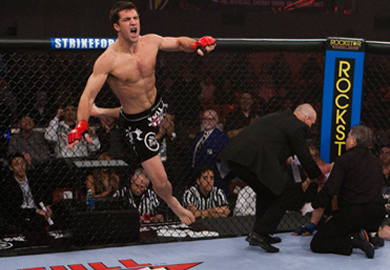 The final Strikeforce middleweight champion, Luke Rockhold, is coming off his first UFC win, which he earned this past month over Constantinos Philippou in the main event of ‘UFC Fight Night 35.’ Rockhold took home the events “Knockout of the Night” honors, as he stopped Philippou with a viscous kick to the body.

Meanwhile, Tim Boetsch got back in the win column in October with his split decision victory over C.B. Dollaway at the UFC 166 event in Houston, Texas. Prior to that, “The Barbarian” had dropped back to back fights to Mark Munoz and Constantinos Philippou respectively.

Who do you have winning this middleweight bout? Let’s hear it Penn Nation!