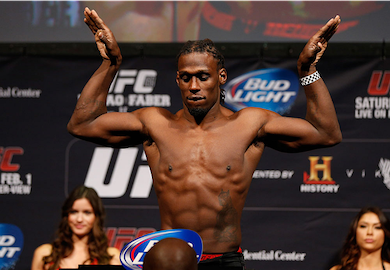 For the second fight in a row, a fighter was in danger of losing his undefeated record. Andy Enz was walking into this fight with an impressive record of seven wins and no losses, but he almost lost all that in the first minute of the first round.

It was an action-packed first round as both Enz and Hester were throwing from the waist. Hester knocked Enz loopy with a left hook within the first minute and it dropped him. It looked like it was all over, but Enz did a great job at regaining his composure and grabbing onto a leg for a takedown attempt.

Enz eventually made it back to his feet and popped Hester with some shots. Hester decided to back off and not blow his gas tank and began to look for a new opening. The remainder of the round looked more like a kickboxing contest than anything as both displayed a great mix of punches and kicks.

The second round was a bit slower paced, but it was all Clint Hester. He landed two takedowns and even though he didn’t pass Enz’s guard, he would let him stand up just so he could pop Enz with a good combination of punches.

Enz’s corner instructed him he needed to end the fight in the third to keep his winning streak alive. Hester stayed active and popped Enz with enough shots to keep Enz at a safe distance, not letting Enz land anything threatening. When all was said and done, Hester had his hand raised.

Clint Hester earned his third win inside the octagon in a row.