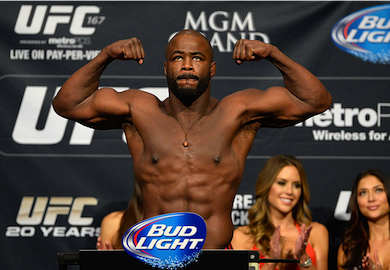 Chael Sonnen and Rashad Evans are two experienced wrestlers, so it wasn’t a surprise when Sonnen shot for a takedown almost immediately. Evans defended intelligently and after jockeying for position, he was able to take Sonnen down himself. That’s where things began to get interesting.

Rashad Evans postured up over Chael Sonnen and slammed his elbow into his face. Sonnen didn’t like that all too much and turned away from Evans, giving up his back in the process. Evans saw this as an opportunity to throw a barrage of unanswered punches. After switching from full mount to having control of Sonnen’s back, Evans landed too many unanswered punches which forced Herb Dean to call and end to the fight.

Rashad Evans defeated Chael Sonnen by way of TKO (Punches) 4:05 of Round 1