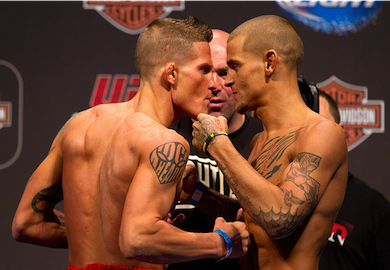 Round one was as exciting we expected it to be. Koch got dropped by a combination from Poirier and it seemed as if it was only a matter of time before the referee peeled him off. Koch recovered quickly and Poirier walked right into a triangle. It was a testament to his submission defense, however, as Poirier kept his composure and escaped. Koch was dropped not even a minute later and winded up in a D’arce Choke that made his face turn purple. Koch survived and made it into Round 2.

The second round was less eventful, but showed great strategy and heart by both men. Poirier was on the offensive most of the round, landing some brutal shots. Walking into the third round, it was evident Poirier was up 2-0 and Koch had to go for broke.

Koch seemed to be aware of this and was very active in the opening moments of the third. Poirier decided to play it safe and press Koch against the cage, wearing Koch down with knees to the body. Koch ended up on top in Poirier’s guard and worked the body for a bit before taking Poirier’s back. With a body triangle locked in, Koch was so close to pulling off a rear naked choke but gave up before the horn even sounded; he was simply too tired.