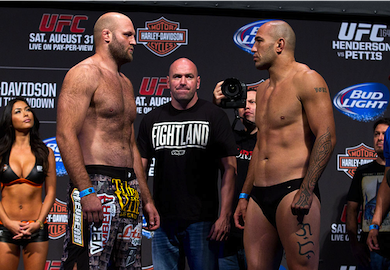 These heavyweights connected with their fair share of shots in the first round. Vera was impressive with his kicks to the body, but Rothwell often powered through them and introduced his fist to Vera’s jaw. Vera was doing a good job at countering Rothwell’s shots with hooks of his own. The most brutal shot was at the end of the round where Rothwell attempted a leg kick that went a little too high, and connected with Vera’s junk. Vera looked deflated, but rebounded as he used a couple minutes to heal up.

Rothwell really took the center of the octagon in the second round as he dictated where the fight went. He connected with a majority of the shots, allowing Vera to connect with only a few significant shots. As the horn sounded, Vera looked relieved to reach the third round when he walked back to his corner.

He wouldn’t reach the end of the third, however. Rothwell bum rushed him with a series of strikes that led to Vera turtled up on the ground. Herb Dean separated the two and called the end of the fight, with Rothwell hands raised in victory.