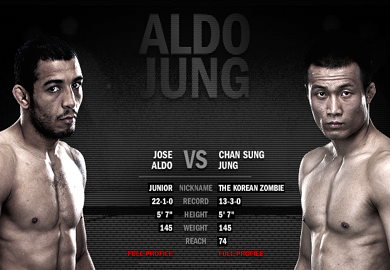 The main event of UFC 163 was a featherweight title fight as Jose Aldo defended his belt against Chan Sung Jung. After a night of exciting fights, this fight would be hard-pressed to fail in the eyes of viewers.

Respect was the name of the game in round one as both men spent the majority of the round waiting for the other to strike. Aldo looked good early as he stayed patient and shot in with a jab to both the head and body of Jung. Jung answered Aldo when he could but couldn’t land anything of worth.

The second round was one dictated by the champion as Aldo landed when he felt and snapped in all of his jabs. A combination to the body of Jung and a set of brutal takedowns highlighted the round. Aldo worked a diligent striking game and seemed to take two rounds from Jung.

Aldo took the fight down in the third after catching Jung during a flying knee attempt. Aldo held Jung down but was stood up after a lack of activity. Aldo was hit with several good shots once they were back on their feet, although Aldo locked up another clinch and held on to it, working an improved wrestling game. They were broken apart again with ten seconds left to let Jung open up with another knee. Aldo avoided real danger and flipped Jung over his back. The round concluded with Aldo on his own back, throwing up-kicks to Jung.

Jung turned up the desperation in the fourth round. They both traded as Aldo seemed to fade slightly. A bad shoulder injury seemed to bother Jung. Aldo saw it and started to throw kicks at the shoulder. Jung defended his shoulder as Aldo was relentless. Aldo jumped on Jung on the ground and threw punches until Herb Dean saved Jung from further and potentially permanent damage.

Official Decision: Jose Aldo defeats Chan Sung Jung via TKO at 2:00 of Round 4.