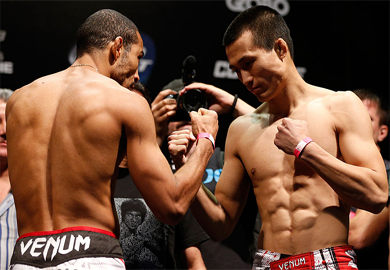 If you can’t make the broadcast tune in right here to BJPENN.COM and follow along with all the blow by blow and round by round results and action as it unfolds.

The pay-per-view portion of this event kicks off at 7:00PM PT.

JOHN LINEKER (21-6 MMA, 2-1 UFC) VS. JOSE MARIA (33-3 MMA, 0-0 UFC)
Round 1 –
The two Brazilians touched gloves to start the first frame and Maria using constant movement and circling. A minute into the frame and Lineker lands the first big shot of the fight to drop Maria, but its brief and his fellow Brazilian gets back up and starts moving again. A spinning backfist from Maria stuns Lineker and Maria swarms. On wobbly legs Lineker defends and fights back while Maria gives him time to recover. A caught kick by Maria converts to an easy takedown but the two scramble and stand back up. Around the 2 minute mark and Maria hits a low knee and the ref is forced to halt the action. Upon continuing the two meet back in the center of the cage but the action has slowed. The round ends with a last-minute flurry from Linker that resulted in a takedown and a few punches to his downed opponent. Tough round to score, slight edge to Maria.

Round 2 –
Round 2 starts and it’s more movement from Maria while Lineker remains on the hunt. A quick scramble on the ground and the two go back to their feet. The two go toe-to-toe and Lineker gets the better of the exchange, drops Maria and punishes his opponent with effective ground and pound until the ref jumps in and stops the fight.

THALES LEITES (20-4 MMA, 5-3 UFC) VS. TOM WATSON (16-5 MMA, 1-1 UFC)
Round 1 –
No touch of gloves to start the fight and the two men take the center of the cage, but its Tales that charges forward with a flurry of punches and backs Watson up into the cage, he  clinches and takes down his opponent. Taking the back to the British fighter just a minute into the round Leites works position while looking for the choke. Watson continues to fight the choke but he eats punches in the process. Leities opens a cut on the face of Watson with punches from the back and Watson having a hard time improving position. Watson scrambles and goes belly down while Leites tries to flatten him out, but during the scramble Watson escapes and with a minute let the two go back to their feet. They exchange blows until the bell sounds. Have to give the first frame to the Brazilian.

Round 2 –
The two men take the center of he cage once more, but Leites backs him up again. This time Watson circles away from the cage and the two reset. Leites is landing, almost at will and takes Watson back down to the ground. He mounts him briefly and Watson gets it to half-guard. Through the scramble Leites takes the back but Watson regains his posture and stands up. Body still locked Leites drags him back to the ground and quickly transitions to the back mount. Watson goes belly down again, shrugs Leties off, but The Brazilian won’t give up and goes for the arm. He hits the attempt, Watson stands up in defense and Leites extends, it’s tight but Watson doesn’t tap and eventually escapes. The two stand back up and start throwing leather once more. Leites visibly tired at this point. The two trade and this time Watson getting the better of the exchange, they clinch and Leites pushes him against the cage. The two jockey for position against the cage, but Watson pushes off and Leites circles off. Leites looks like he has nothing left and the bell sounds.

Round 3 –
Watson the fresher fighter to open the round but the Brazilian charges forward and Watson leaves the exchange a bloody mess. They clinch against the cage and Leites hanging on. The ref calls for the fighters to work with three-minutes left and Leities works for a takedown, it doesn’t work. Watson defends and the two go back to the center with strikes. Leites shoots in on a double and earns it. He works to mount midway through the round and Watson again goes belly down and stands up. Leites drags him back to the floor, mounts against the fence, transitions to the back where he has continued to dominate all night and through the scramble works for an arm triangle, it’s tight, but Watson doesn’t tap. The Brazilian repositions and with 30 seconds left goes for the same choke. Watson gives a thumbs up but Leites stays squeezing until the round ends.

CEZAR FERREIRA (5-2 MMA, 1-0 UFC) VS. THIAGO SANTOS (8-1 MMA, 0-0 UFC)
Round 1 –
The round starts with no touch of gloves and Cezar takes the center of the cage. Santos lunges in and gets caught with a strong left that sends him staggering back. Ferreira hones in on his opponent, throws a kick to the head that lands locks in a guillotine choke and rolls into it. Santos taps and the Vitor Belfort protegé earns the win.

PHIL DAVIS (11-1 MMA, 7-1 UFC) VS. LYOTO MACHIDA (19-3 MMA, 11-3 UFC)
Round 1 –
The co-main event starts and the two fighters do not touch gloves to start the round. Machida takes the center while Davis circles and Phil throws the first kick and it lands to the body. A lot of footwork from Davis early and Machida slows stalking his way into this fight. Machida drops his hands almost inviting Davis to strike with him but Davis stays circling. Machida continues to inch his way forward while following Davis and throwing feints and leg kicks throughout the round. No takedown attempts from Davis at the midway point. A left high kick lands for Machida and it pushes Davis against the cage. Machida countering well as expected but no real damage from either fighter with 1:30 left in the round. Machida fins his opening and explodes on Davis, finishing with a flying knee and Davis hits the mat, but pops right back up. With 50 seconds in the frame Phil goes deep with a double leg takedown and lands it. He’s looking for a kimura but cannot get it and opts for some ground nd pound to close out the round.

Round 2 –
The two head to the center and Davis circles on the cage line. Both fighters remaining patient. A high kick lands from Machida, but Davis remains unfazed. The two trade kicks but no real damage from either delivered. Phil shoots, clinches, but Lyoto quickly exits and returns to the center and that brings us to the midway point. Davis seems content to stand but with 1:30 left on the clock gets a double leg stuffed and quickly repeats and get the second take down attempt stuffed as well. Machida lands a beautiful straight left hand with a minute left but Phil stays standing. 20 seconds left and Phil gets the takedown. He throws knees to the body, some ground and pound but the bell sounds.

Round 3 –
Back to the center and Phil throws a jab and misses. Lyoto starts off with kicks and counters Davis as he comes in. Davis picking up the pace in the final frame but nothing significant at the 3:30 mark. Big knee landed by Machida as Phil lunges for a takedown and Lyoto ends up in top position on the ground. Davis quickly pops up and after a brief clinch the two go back to striking. Davis running and the two start swinging. Machida opening up and lands a big left. 2 minutes left and Davis shoots for a big double leg, gets deep but can’t secure it and Machida defends. At the 1 minute mark Davis tries hard for another takedown and Machida fights irt off. They exchange until the bell sounds. Very close fight.

CHAMP JOSE ALDO (22-1 MMA, 4-0 UFC) VS. CHAN SUNG JUNG (13-3 MMA, 3-0 UFC)
Round 1 –
The two touch gloves to start the fight and Jung feints. Jung drives forward with strikes and Aldo evades. They reset in the center. Aldo lands a nice overhand right but Jung stays in front of him. Two-minutes in and not much action, both fighters still feeling each other out. Midway through and Aldo lands his first stung leg kick of the fight. it’s a slow pace and both fighters are remaining patient. 30 seconds left in the round and Aldo shoots and scores a brief takedown but his Korean counterpart pops right back up and the two stand. They end the round with a flurry and nothing of note to report on in the first.

Round 2 –
A touch of gloves to start the second and the two stand in front of each other in the center. Jung the fist to go forward with a combo but Aldo stays composed. Jung moves forward again, they trade and it ends. Aldo throws a counter upper that misses and this round starts out more active than the first. Nice body-body-head combo from Aldo but it doesn’t seem to effect ‘The Zombie’. We reach the midway point of the round and the two remain standing in front of each other in the center of the cage. A big left at the 1:30 mark lands for Aldo, bucks Jung but just briefly. Aldo lands a takedown with a minute left and works from halfguard into side control. Jung remains calm while Aldo works position. Jung regains guard and throws up his legs looking for an arm, doesn’t get it. The round ends moments later.

Round 3 –
The two feel each other out to start the round, 45 seconds into the round and Jung throws a flying knee, is caught and taken down by the champ. Jung gets back up and they clinch against the cage. two-minutes into the round and Jose drops for a double against the cage hits a trip but Jung pops up quickly to his knees. Aldo remains deep in a body lock trying to takedown the challenger as the ref calls for him to work. It’s a stalemate against the cage and the ref separates them. Jung opens up but Aldo is unfazed. They both throw and Aldo reverts back to a double leg takedown, he can’t hit it and the two stall against the cage. Jung goes for a front headlock from the clinch but can’t get it and Aldo remains clinched against the cage. Ref again separates them as Aldo continued to stall. Jung throws another flying knee as the 10 second blocks clap and they both drop to the mat. The round ends.

Round 4 –
The two show respect in the championship rounds and touch gloves to start. Jung moves forward but little action in the first minute. It appears that Jungs right shoulder separated and Aldo swarms on Jung. Yup, Jung is injured with a shoulder separation and Aldo lands until the ref pulls him off. A disappointing end to a fantastic back and forth fight.