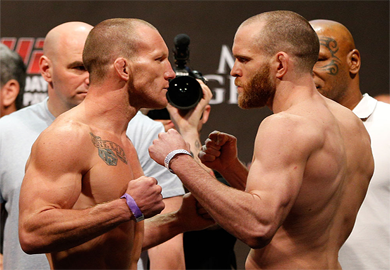 After Donald Cerrone dominated KJ Noons it was on to Gray Maynard vs. TJ Grant.

TJ Grant and Gray Maynard came out swinging from the first bell with TJ eating some shots. About halfway through the round TJ connected with a right hand to drop Maynard, TJ swarmed in while Gray tried to survive but was hit with a knee as he tried to escape along the cage, the referee steps in and calls it a fight.

TJ Grant wins via TKO in the first round.

TJ Grant now moves up the 155 pound ladder and wants to fight Benson Henderson next.