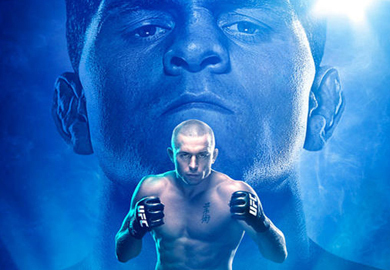 Dana White:
(referring to Condit)”What he did tonight showed he was a well rounded mixed martial artist”

“Nothing surprises me with Nick. Do I think he should retire? No. But if guys say they should retire in this sport, they probably should. I don’t think tonight’s fight was anything to overreact about. Nick’s been talking retirement for a while now. After tonight he could probably retire.”

“Hendricks is the number one contender. Done”

“I thought Nick was pretty good throughout this whole thing. I think Yves should have taken a point when Nick swung at GSP on the ground after the bell.”

“Jake shields sat in on the hand wrap, and they came back and said they want another guy to look at the hand wraps. Then as soon as the fight was over, both wraps were cut off and put into a bag for the commission.”

“I think when these guys got to the point at the press conference saying, my dark side and all this shit, ‘you said that’. I didn’t get an impersonator to say it. All the stuff with Nick Diaz has actually happened. In between rounds Diaz said GSP is a bitch and hits like a pussy. This wasn’t promotion, it wasn’t anything. it’s Nick Diaz. At the end of the fight, I wouldn’t let anyone go in until I made sure it was okay. Nick pushed one of GSP’s cornermen. Trust me, whatever they say, they’re not that good actors.”

“I think GSP does a great job of taking guys not only out of their game plan but out of their element. Georges was getting the better of the stand-up. He fought a great fight against a tough nasty guy. He fought the perfect fight. I kept saying it throughout the fight, he was standing with him, and Diaz defended the takedowns.”

“Ellenberger stood right in there with Nate and finished him. didn’t even try taking him down.”

“These hungry Strikeforce guys are looking good. I like it.”

(On Diaz swinging after bell) “That’s his style. To get in your head to intimidate you or to make you play his game. That’s definitely his style. The difference is, he went to slap Georges, the ref should have taken a point away right there. It was intentional and should have been a point.”

Georges St. Pierre:
“It was a fight that everybody wanted to see. I wanted it as well, and I’m happy it’s finally done.”

“I need to get out of Montreal. I’m going somewhere exotic. Since my knee rehab, I haven’t taken a vacation. I went from one fight to another. I’m going to take a vacation and forget about my crazy life.”

“I didn’t want to fight in a close boxing range. I wanted to fight kickboxing range: all the way in or all the way out. He had a very unusual style of BJJ. I brought in a lot of high level grapplers, but I’ve never seen anyone like this.”

“I got a bit tired around the third round. It was weird.”

“I never took steroids in my life. I want olympic testing.”

Nick Diaz:
“I’m trying to retire but I want a rematch. I dont want to fight any of these kids but ill fight GSP again”

“Everybody knows they aren’t gonna pay me no money to fight these guys.”

“I wouldn’t hesitate a few seconds to take the rematch not that i think for a second that I’ll get it. I think i’d win. i think i could beat you [to Georges].”

“I’ve never paid taxes in my life, I’m probably going to go to jail. Nobody wants to hear that talk. But i’ve had fight after fight since high school. Think about what three fights a year will do your life.”

“I’ll fight one of these guys.”

(To Johny and GSP) “I dont know why you are sitting next to eachother if you are going to fight. I dont think anybody wants to see that.”

“The sport is geared towards the wrestler.”

“If you watch Pride FC, you had to punch the guy.”

“This guy has no punching power (referring to GSP). Sorry no offense, you’re a wrestler. I would up with a cut, maybe he had something wrong with his wraps, I aint accusing him. I could talk shit all day. I’m not finished, I’m not beat up.”

Carlos Condit:
“I need to work on my wrestling. It’s pretty obvious.”

“Both fights I put on a show and left it all out there, but I came up short.”

“I thought there was a possibility I might get the decision depending on how they saw it.”

(On potential Hendricks St. Pierre matchup) “It’ll be an interesting fight. Johny has really good wrestling as does Georges. Striking styles are different. Johny has a lot of power and he is a brawler. I’m not gonna pick tonight.”

Johny Hendricks:
“The first round [is when my hand got hurt].”

“The injury played a lot more into my decision for more takedowns. When my weapons are injured you have to find a way to win and thats what i did.”

“I knew I had to fight him everywhere.”

“Hopefully I showed that I can do a little bit of everything.”

“I believe I have better wrestling than St. Pierre. I’ve done it since I was five. I also hit harder than him, that’s a proven fact.”

“Nothing [referring to hand injury] is going to hold me back from St. Pierre fight.”

“Hopefully GSP gives me that chance too (to stand with him)”. I can’t wait to prove to him that I belong in there. I’ll be glad to come to Montreal.”

Jake Ellenberger:
“I’ve never turned down a UFC fight, I’m focused on getting that title fight myself, and I’m one step closer tonight.”