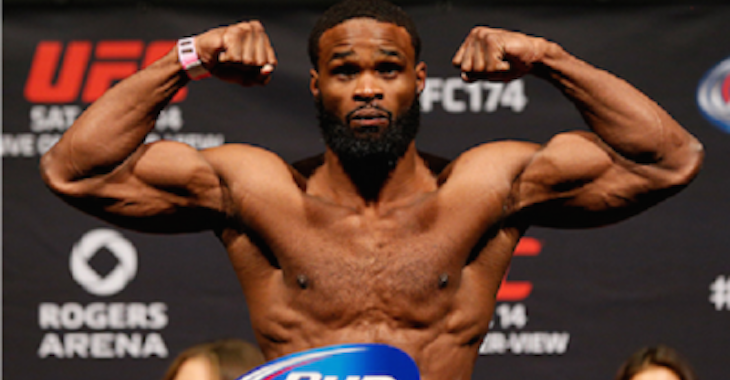 Imagine getting yourself geared up for a fight. Training for months, dieting, breaking down your body, getting mentally prepared, then, the day before the fight you find out it was all for nothing. Yeah, that’s probably how UFC welterweight Tyron Woodley is feeling right now.

The news came out Friday morning when Dana White sent out a tweet saying that it was pulled from the card after an issue with Hendricks weight cut.

We then found out that the issue was an intestine blockage and kidney stone that forced Hendricks to the emergency room.

UFC fighters reacted on social media, some upset with Hendricks, while others felt bad for Woodley.

Woodley spoke with MMAFighting and was obviously frustrated with the situation. I think you can tell from his comments.

“I’m frustrated, obviously. I’m always trying to look for the lesson in things and positive signs. I believe things happen for a reason.

“I’m counting this as a loss for him. You got to make the weight. I’m sitting here at weight, wired, ready to wage war and now I’m not going to get that opportunity.

“And I shouldn’t have to fight anyone else, do anything else spectacular … nothing . I should be next for the title shot now. It’s called professional mixed martial arts for a reason. There should be some level of professionalism involved.”

You can see what Hendricks had to say about the situation right HERE.