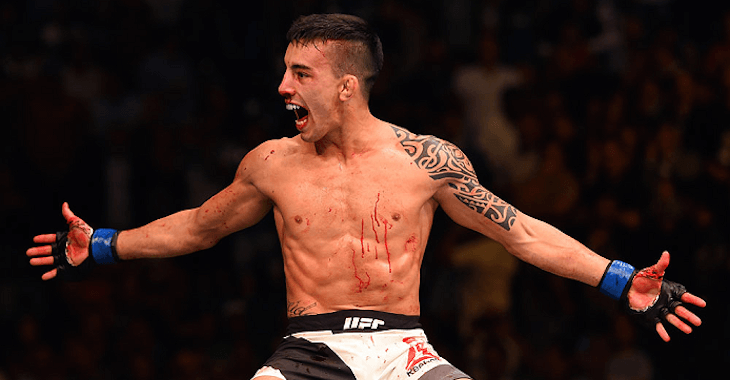 Thomas Almeida continued his amazing streak of victories last night when he stepped into the octagon with Anthony Birchak at “UFC Fight Night 77”. The Brazilian brought his hometown crowd to their feet in the final minute of the first round when he fired off consecutive thunderous right hands that sent his opponent crashing to the canvas without a hope of fighting off defeat.

Mixed martial artists around the world exploded on social media when they saw the knockout! Check out what some of the biggest names of the sport had to say about it in the Tweets below:

Wow. @ThomasalmeidaCB is the TRUTH! Great patience and awesome killer instinct. One he had him hurt he was brutal and precise.

.@ThomasalmeidaCB is a young guy but he fights with the fight IQ of an old veteran. I'm massively impressed with him.

That was a ridiculous knockout! You can't fight Almeida in a shootout. Gotta be slow and controlled. That's how I win that match-up. #UFCSP

How can you not be a fan of Thomas Almeida. @FS1 @ufc

135 has some real prospects developing…a division to be excited about for sure!

Well, that's why I think #ThomasAlmeida is gonna be something at 135 #UFCSaoPaulo

It looks like the entire MMA world is behind Thomas Almeida. Where do you think he will be in three fights? Will he be fighting for the gold, or will he still be climbing the ranks? Share your thoughts in the comment section below!