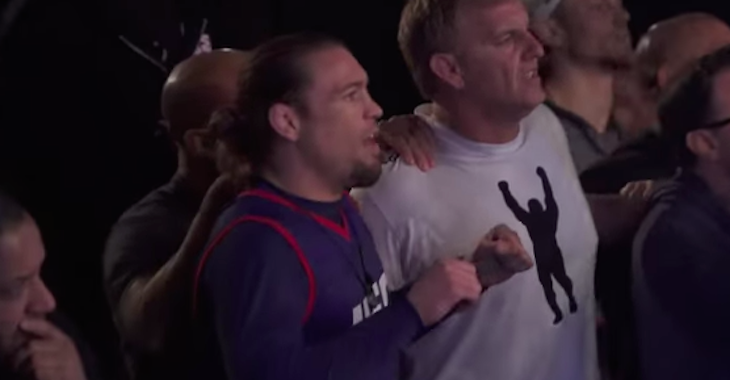 Week 1 Recap: We quickly found out that owners Dan Lambert (ATT) and Glenn Robinson (Blackzilians) do NOT like each other. Whether or not Robinson stole talent and bought his way to a world-class gym or not, Lambert had a reason to hate his rival when the Blackzilians picked up the first win of the season. Blackzilians lead with 25 points (ATT has 0) and tonight’s fight is also worth 25 points.

Almost immediately we see members of Blackzilian and American Top Team trash talking each other in the kitchen. ATT’s Hayder Hassan started out the conversation with Kamar Usman, but the talk ended with a verbal-jab that left Usman with a bad taste in his mouth. Whatever they truly think of each other, it’s obvious to both men now that Hassan wants to fight Usman.

American Top Team Coaches pick Uros Jurisic to fight in tonight’s episode. Jurisic is well-rounded with some decent speed and power. Without knowing who the opponent was, Blackzilians chose Luis Buscape. When the fight was announced, it became clear that American Top Team coaches were concerned about Buscape taking the fight to the ground and holding it there. White expressed this concern before the fight started, and it turned out to be pretty accurate.

Things got heated at the weigh ins. Normally, officials are worried about the fighters duking it out at the weigh-ins. This time, however, it was the gym owners that were down each other’s throats. Lambert made fun of Robinson for doing a tough guy post and Robinson fired back a profanity-laced rant. It’s only episode two, so of course they didn’t actually get into a scuffle. Eventually, we make our way to the fight where White’s prophecy came true.

Round 1: Jurisic likes striking from a distance and whiffs a few haymakers. Buscape only needs thirty seconds to take the fight to the ground— Jurisic showed little resistance. While Jurisic seemed scrappy from the bottom, Buscape was taking minimal damage while landing decent hammerfists himself. Jurisic kept trying for a guillotine when there was no chance he was going to lock it in; all that did was waste energy. The rest of the round was essentially Buscape outclassing Jurisic on the ground.

Round 2: Jurisic opens with a wild jumping knee. Again, Buscape lands a takedown within the opening minute and lands directly in side control. Jurisic bucks up and gets back to his feet where he whiffs every haymaker until Buscape takes him back down. Buscape almost walked into a guillotine again, but Jurisic was too fatigued to hold on to it. Jurisic gets back up thrice only to get taken down again. Buscape barely peppered the body with his elbow as he simply waited for time to expire. Obvious 20-18 victory for Buscape.

After the bout, Jurisic admitted he needed to listen to his coaches more. Of course, Buscape was elated with his victory.