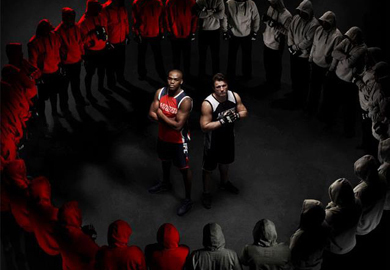 The Ultimate Fighter returned Tuesday night on FX with the second episode of the season – “Ambush.” In the first preliminary bout, Luke Barnatt, from Cambridge, England, dominated Colorado Spring’s Gilbert Smith when they squared off in the Octagon.

Using his significant height and reach advantage, Barnatt, 5-0 in mixed martial arts, dictated much of the fight before stopping the much smaller Smith (5-1) in the second round.

Before the bout, the fighters on Team Jones had voiced concerns about the match-up, but head coach Jon “Bones” Jones insisted on his selection and, ultimately, was proved wrong.

A full recap is available at ufc.com.

The series resumes next Tuesday, February 5, on FX at 9 p.m. ET/PT (check local listings for Central and Mountain Time). In that episode – “Embrace the Suffering” – a fighter responds after being called out, coach Chael Sonnen gives advice to a fighter lacking confidence, coach Jones bonds with his team during a house visit and two fighters deliver explosive action in the Octagon.