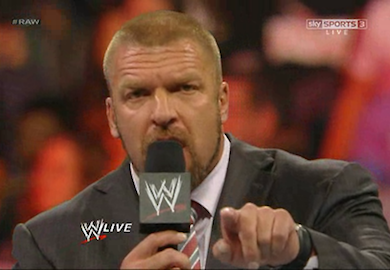 “[The UFC] aren’t really a competitor to us and I explain this to our talent this way in the Performance Center and every time I say it people will say to me oh, that made it very clear for me: people like UFC, they like boxing, but it’s completely different from what we are.

“We are like the movie Rocky. We’re a story. We’re a great story that just happens to take place sometimes in the wrestling ring, so if you think about us less of Floyd Mayweather in a boxing match which you’ll watch one time and on pay-per-view and then once that fight’s over it’s kind of done, you know, and you’re really not going to go back and watch it a bunch of times unless you’re a connoisseur of boxing science, you’re gonna watch it one time. But Rocky the movie you will watch over and over and over again. It’s the story, it’s the characters. Boxing is irrelevant to the movie really. It’s a triumph story, it’s a love story, it’s all those things and that’s what we do.

“We create characters that you gravitate towards, that you connect with, that you passionately engage with, you believe in on a visceral level, whether you hate them or love them. We put them in unique story lines with creative passions and good guys and bad guys and the drama and sometimes love throws.”

In a recent “fireside chat” (AKA – Interview) with senior business analyst Laura Martin at the Needham Interconnect Conference for investors in New York City, WWE frontman, Triple H discussed the difference between the UFC and his company.