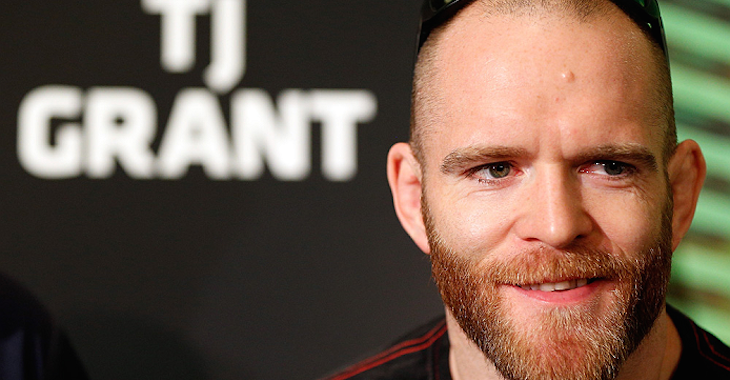 TJ Grant went from being weeks away from having the biggest fight of his life for the UFC Lightweight Championship to contemplating retirement due to concussions. Now, after making a full recovery, Grant is eyeing a return to the octagon.

“I feel 100 percent healthy,” Grant told Leader Post in a recent interview. “It’s just there’s a little bit of hesitation as far as returning to competition. In my heart I want to do it but I’m trying to be smart. I want to make the best decisions I can and make some money while doing it.”

The issue with suffering a concussion in a contact sport like this or hockey is that after your first, you are more susceptible to suffering them again in the future. NHL star Sidney Crosby was forced to sit out the majority of his season years ago after falling victim to repeated concussions.

Crosby, however, made a triumphant return to the rink and Grant is hoping to do the same. Grant wants to return in similar fashion, but he is hesitant about the risk of suffering another concussion.

“I fight for my life when I’m out there. I’ll do what I have to do (to win). Later on is when I’d have to live with the repercussions potentially. That’s part of the reason I’m still a little hesitant to return.”

“To be honest I haven’t really worked a regular job since maybe 2005. Basically, I’ve gotta make a living. When you’re injured it’s one of those sports where you can live off what you made for a little bit but we don’t make that much money so you have to go on to other things.”