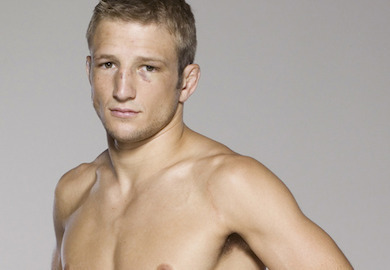 UFC bantamweight champion TJ Dillashaw is currently prepping for his first title defense against the man he took the belt from last month, Renan Barao. After decimating Barao in their first encounter, Dillashaw is confident he can beat Barao 10 out of 10 times. He spoke with Sexto Round about the UFC 177 rematch.

“I’ve watched the fight a couple times and everytime I get nervous before I watch it, even though I know how it’s going to go down. And it’s just amazing; I couldn’t of wrote a better story myself. It was perfect.

You know, I knew I had the gamepland and the athleticism to beat Barao the way I did. Obviously I expected a really tough fight, a war. Everything went super smooth for me, so yeah, I guess I expected a little tougher fight.

Oh, I mean, no matter what I’m going to have to do something different. I want to become a better fighter every fight. That’s not my best performance, I’m going to get even better from that fight. And, yeah, I’m gonna win 10 out of 10 times. That’s just the fact that I’m going to continue to get better. I’m going to be better than I even was when he faces me again.”