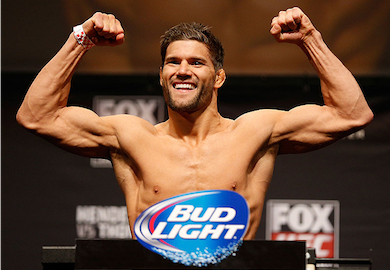 I knocked out your brother, I’ll knock ur bitch ass out in San Jose July 26th.Let’s do it Bitch, San Jose vs Stockon. Yup, FUCK U NICK DIAZ!—
Josh Thomson (@THEREALPUNK) May 04, 2014

Obviously, the post is out of character for Thomson, and the UFC lightweight fighter instantly recanted the post, explaining what happened.

People that know me, know I wouldn't ever talk about a fighter like this. My phone was stolen last night while at dinner.

I respect every fighter and especially the Diaz brothers. @NateDiaz209 an @nickdiaz209 always been cool guys to me and nothing bad to say

My apologies to anyone who was offended by the tweets and texts.

Think his reasoning will be enough to halt any retaliation from Nick and Nate?