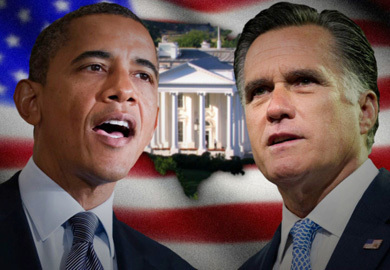 Last night The United States Of America as well as most of the civilized world stood by and waited for the results of the 2012 presidential election.

Many of MMA’s biggest stars took to politics with their reactions on the results:

Dan Henderson ‏@danhendo
I really hope Romney pulls it out and wins today.

Todd A ‏@mrkeeaumoku
The silver lining is that we are steps closer to seeing America hit rock bottom. That’s when the people will finally have had enough.

Brandon Vera @Verafied
Damn….. Another 4 yrs of this ish…… Damn…. Sad day America. I even voted for his ass the first time….

Tom Lawlor ‏@FilthyTomLawlor
SCREW THIS!!! I’M GOING TO CANADA! Who’s with me?!?!

phil baroni ‏@philbaroni
It doesn’t matter what the final results were, I made my vote and I’m sticking to it.
__ Obama __ Romney X Yoga Pants

The Sick of It All

Yves Edwards ‏@thugjitsumaster
Shoutout to everyone who thinks both major party candidates are worthless & are exercising their right NOT to vote. Soldiers fought for that

@THEREALPUNK: It’s over! No more politics for this guy now that this election is done.
Daniel Cormier ‏@dc_mma
THANK GOD!

Yves Edwards ‏@thugjitsumaster
It’s funny when people call @BarackObama the antichrist? Well, doesn’t that have to happen for your stupid fantasy to come true?#DumbFucks

Ken Pishna ‏@KenPishna
$2 Billion spent by Obama and Romney on election. How much good could have been done w/ that money in other areas? Cancer research perhaps?

Brian Stann @BrianStann
regardless of who is President our polarized society is a serious issue & worries me most of all, I hope we people can learn to compromise, we out# politicians

And finally, it is time to move along

Ariel Helwani ‏@arielhelwani
Is it safe out there yet? All those political tweets outta your system? Yeah? Good! Big news today: #themmahour is back in your life.