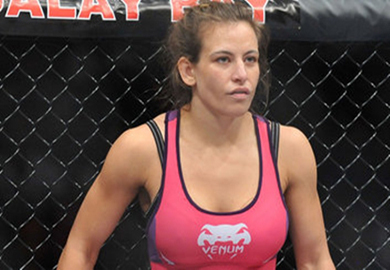 I felt like sh*t, to put it quite frankly. Watching it again, I looked better than I felt, but I really had to push myself because I felt horrible. I was trying to push out of first gear but it didn’t really happen. I did a lot of good things defensively but I wasn’t able to do some of the offensive things that we worked on… I told Dana White that I’d fight her as many times as he’d let me. I don’t care if I fought her 100 times and I lost the first 99 of them. I would fight her 100 times, as many times as they let me. If she beats me nine times out of 10, that might be the reality of it, but I would be game to fight her any day at any time they’d let me.”

In a recent interview with Fox Sports, Tate expressed her opinion regarding her recent loss to UFC Champ, Ronda Rousey. According to the report, Tate also revealed having an adrenaline dump before her co-main event fight at UFC 168. Tate described herself as being in a state of “relaxation” when she needed to be “explosive”. The former Strikeforce champ also voiced her opinion about the post fight hand shake that didn’t happen, despite Tate being the first to offer her hand.

“That was my respect for her as an athlete… Now that [the fight]’s over, you won’t see me trying to shake her hand anytime soon.”