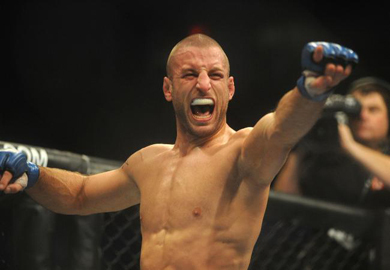 Former Strikeforce Welterweight champion Tarec Saffiedine successfully made his Octagon debut in August when he picked up a decision win over Hyun Gyu Lim in a fight of the night performance. After that Saffiedine was expected to fight Jake Ellenberger at UFC 172, however Saffiedine pulled out of the bout with an injury. Now eyeing a fall return, Saffiedine spoke with MMAJunkie about his return to the Octagon, and even called out Rory MacDonald.

“I’m trying to get a fight around September. That would give me a little bit of time to get back in shape before starting camp. I don’t want to go just right away into camp. I’d like to get back into the shape you need to be before camp. I’d love to have a camp of six or seven weeks for my next fight, and so that’s why I’m hoping to fight in September.”

“With the proper camp and me doing everything I need to do, I know I can beat that guy. He’s close to the title shot, so it’s a fight I’d love to have. I think we can put on an amazing fight, and I believe that my style can beat his style, without a doubt.”