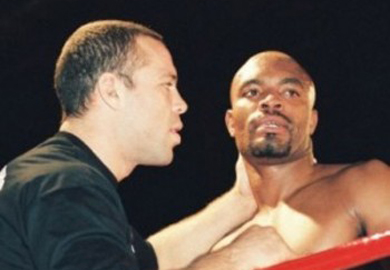 By Evan Stoumbelis:
UFC Middleweight champion Anderson “The Spider” Silva took some time recently to give his thoughts on the coaches of The Ultimate Fighter Brazil, Wanderlei “The Axe Murderer” Silva and Vitor “the Phenom” Belfort.

The coaches are set to square off at UFC 147 in Brazil, where Anderson Silva will be defending his title against long time rival, Chael Sonnen in the main event. These coaches fought back in 1998 in Rio De Janeiro, where “The Phenom” decimated “The Axe Murderer” and won the fight in a stunning 44 seconds via knockout.

The Spider said “Vitor Belfort has skills above the average fighter in the division, but he is not unbeatable, neither is Wanderlei. It will be a hard fight for both.

Wanderlei is a very hard worker and has a lot of grit, we’ve seen it a million times, Wanderlei history in the MMA cannot be overlooked. The first thing they need to do is respect eachother.” Said in classic Anderson Silva fashion, never forgetting respect.

Anderson went on to say that he would be cheering for Wanderlei, and that if Wanderlei asked him to help train, he would absolutely go. “Look, regardless of what we have done with our careers me, Wanderlei, Shogun, Rafael Cordeiro, and all other athletes that came from ChuteBox, we have this warrior spirit so the only way to beat us is by knockout or submission, otherwise its impossible,” Says Anderson.

“Wanderlei is working with the right people, and in a good condition, well trained and with a clear head, it is very difficult to beat him.”