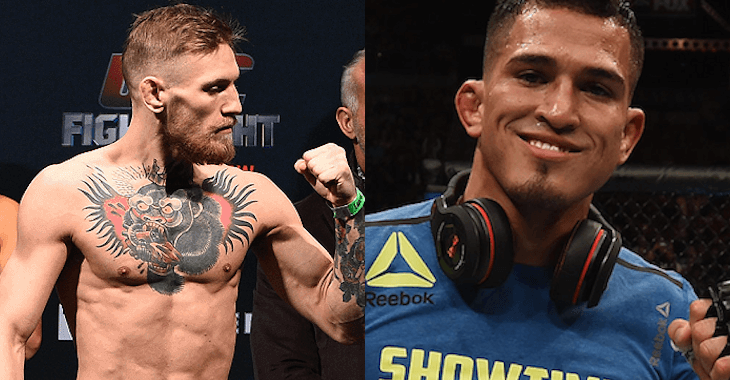 Before he even won the UFC Interim Featherweight Championship, Conor McGregor had a target on his back. Whether it was established fighters looking for a major payday or up-and-comers looking to prove themselves, “The Notorious One” has always had something to prove to his naysayers and potential opponents.

McGregor blasted through the likes of Dennis Siver and Dustin Poirier before he signed the dotted lines for the biggest challenge of his life: Jose Aldo. The fight was scheduled to take place at “UFC 189”, but Aldo was forced off the card when he suffered a rib injury in training. Chad Mendes stepped in as a late replacement for the Brazilian and the two did battle for the Interim featherweight championship.

Mendes performed well, but McGregor’s body shots and a short training camp cut his conditioning in half and the Team Alpha Male fighter fell to strikes in the second round.

UFC lightweight Anthony Pettis isn’t a believer in McGregor yet, though. At a recent question and answer session with the fans at the Toyota Center, Pettis mentioned that he wasn’t impressed with McGregor’s track record.

“Aldo, he’s beat everybody, but he’s at 145,” Pettis said. “Aldo would be a good challenge for me. With Conor, he hasn’t beat anybody yet, so it’s hard to tell. If he beats Aldo, then he’s legit… Conor’s talking and doing his thing, but he hasn’t beat no one yet.”

Conor McGregor is training for his championship unification fight with Jose Aldo at UFC 194 while Anthony Pettis is getting ready to duke it out with Eddie Alvarez.

Do you think Conor McGregor is the real deal? Were his wrestling skills put to the test when he met Chad Mendes at UFC 189? Share your thoughts in the comment section below!