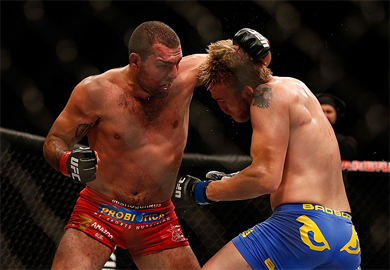 Former UFC light-heavyweight champion, Mauricio ‘Shogun’ Rua is set to take in Antonio Rogerio Nogueira in a rematch from a classic 2005 bout that saw Rua walk away with a decision win. Now, eight years later, Rua says that with a renewed staff, extensive training, and drive to once again defeat ‘Lil Nog’ he will be ready for anything:

“I’m very happy because everybody wants this fight again. Me and Rogerio, too. Rogerio is a good fighter and a good guy and I respect him, but I trained a lot and I hope to win again. Rogerio is excellent fighter. I need to be ready for everything. Wrestling, boxing, muay-thai, jiu-jitsu, everything. He is a black belt in jiu-jitsu with good boxing. I’ve done everything for no surprises in the fight.”

The fight is set to take place on the main card at UFC 161 on June 15th at the MTS Centre in Winnipeg, Manitoba, Canada. The main event of the night is an interim title fight between Renan Barao and Eddie Wineland with Rashad Evans fighting Dan Henderson in the co-main event.

FOR UPDATES ON THIS STORY AND MORE, VISIT BJPENN.COM