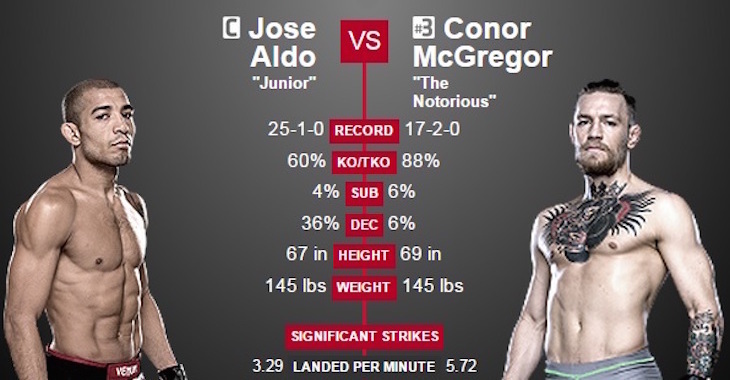 With only six days left for the largest UFC event to hit Las Vegas, who better to ask for the opinions of the fighters who share the octagon with the brightest stars who will shine on December 12, in Las Vegas NV at MGM Grand Garden Arena.  MMAMania polled the pros for answers.

Light Heavyweight, Glover Teixeira:
“Aldo is my boy; he’s my friend. He’s my good friend; we talk all the time. I just think his skills and his speed [will be the difference]. McGregor is no joke; he’s not just a talker. It’s going to be a great fight. I’m with Jose Aldo 100 percent and I think he keeps his speed and doesn’t let McGregor get in his head.”

Welterweight, Gunnar Nelson:
“I think he’s going to finish Aldo. I’m very sure of that. I can definitely see Aldo coming in strong and over-committing to some of his shots and getting caught and getting put down in the very first round … even in the very first exchanges. But, I could also see Conor wearing him down and finishing him in the later rounds. I don’t think it’s even going to hit the championship rounds.”

Featherweight, Myles Jury:
“I feel like the McGregor and Aldo fight … it’s an interesting fight because Aldo has a great style and he’s been proving that he’s the champion for a while. Then again, Conor is coming up and he has a great way of getting in opponent’s heads. I’m interested to see how hungry Aldo is and how his chin holds up. If that’s good, he’ll beat Conor. If Aldo shows up and he’s not on-point, I can see Conor taking it away.”

Bantamweight, Frankie Saenz:
“I gotta go with the champ Aldo, as far as his experience. I’ve seen him fight the best guys in the division and beat everybody up. I feel like he just has more than Conor McGregor has to offer. I think his stand-up and his striking is a lot better and I see Jose Aldo taking this one.”

Welterweight, Tim Means:
“Aldo is a beast. Conor is absolutely in Aldo’s head and that’s 90 percent of the battle. I think he’s broken Aldo already and I think McGregor will be the new champ.”

Lightweight, Yancy Medeiros:
“I feel like they have the tools to beat each other. I feel Aldo’s been in more wars, so he’s tailored for a longer fight. McGregor just has this thing with getting in fighter’s heads. He knows how to disrupt them emotionally. When it comes to Aldo, if he comes into this fight smart and tactical, he can pull it off, but I don’t feel like Conor doesn’t have a chance.”

Heavyweight, Jared Rosholt:
“I’m going with Aldo for sure. I know that everybody is into the McGregor thing and it’s interesting. It’s something different. It’s hard to go against someone whose beat up everyone in the division and been champion for so long. I’m not going to go against a guy that’s that successful.”

There you have it, the fighters gave their short assessment on the Aldo vs McGregor scrap. Which fighter gave the best answer to the most important question leading up to UFC 194? Who do you have taking the belt?