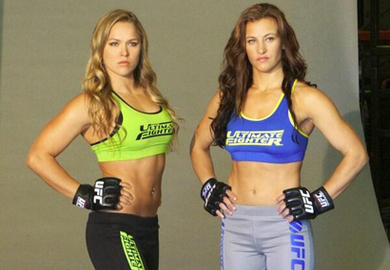 Last night’s episode of The Ultimate Fighter was a recap show filled with commentary and narration from the UFC boss Dana White and TUF coaches Ronda and Miesha.

The Majority of the episode gave first hand recounts of the action thus far in the house and TUF tournament, but a small portion went to explaining why, in episode 1, Ronda Rousey thought Miesha Tate was in as her replacement.

“What a lot of people don’t understand is I had a huge blowout with her attorney the Sunday before everybody was supposed to come here,” revealed Dana White.

“We were having contractual disputes about the show and Dana said that he was considering throwing me off the show and replacing me. We all ended up reaching an agreement at the very end, but the last thing Dana ever said to me is, ‘I don’t know what we’re going to do,’” explained Rousey.

“I think Ronda thought I was doing something to her. Like I was going to bring Miesha in and kick Ronda off the show,” said White.

“How would I have known that Cat Zingano blew her knee out? Miesha even said that she was supposed to be purposely vague and let me reach my own conclusions about it,” said Rousey. “And it wasn’t very nice.”