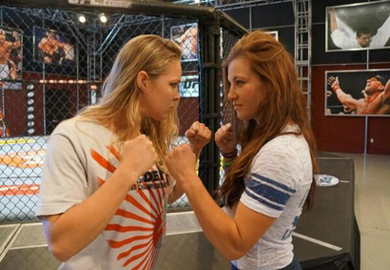 “The talent is great. I’m really impressed with the kind of people that we saw on the show this season for the girls and the guys. All of the fights have been really exciting. Really, it has exceeded my expectations. Surprisingly, it is much more professional than you would have thought. I wouldn’t say it’s an overly sexual season, but I think it’s a much more emotional one. So far, it’s tiring, and it’s every day. It’s been a very exciting season, but it has also been very taxing on everybody. So I think we’re all going to be very happy to get home, but I’m sure all the fans will be very happy with the result.”

For the first time in TUF history, the house is filled with both male and female fighters. Many wondered how that would play out.

In a recent fan chat sponsored by Metro PCS, Ronda Rousey, killed some of that hype with the explanation about.