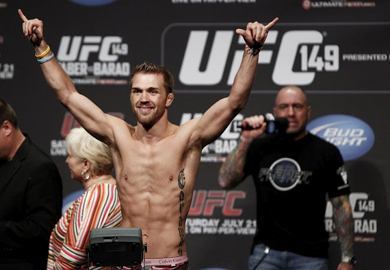 If somehow over the past two-years you missed the feud between Ronda Rousey and as she calls him, ‘Mr. Tate’, than I am sorry for not giving you the entire background story.

However, for those fortunate enough to have followed this story since inception, what we have here is a snip from the UFC female champ on her Metro PCS fan chat saying she would love to beat down what is widely considered the most hated man in MMA, Bryan Caraway.

“People ask me this question all the time and it’s the same answer all the time. I would love to beat the sh*t out of Bryan Caraway, but apparently it’s not legal. And he seems like the kind of b*tch that would sue me.”