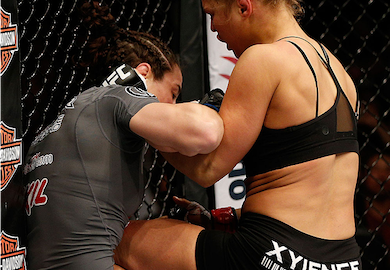 “I promised my coach that I would do it, I really did. I promised that I would drop her with a body shot. I’ve been working on it so hard for this camp. We knew that she’s a wrestler and she was going to be more bent over all the time and, yeah. I don’t know what to say. I can’t wait to see what people come up with to complain about this time.”

For the first time in her career, Rousey finished a fight without the use of her world-renowned arm bar, a feat she say’s she promised her coaches she would accomplish prior to her UFC 170 main event.