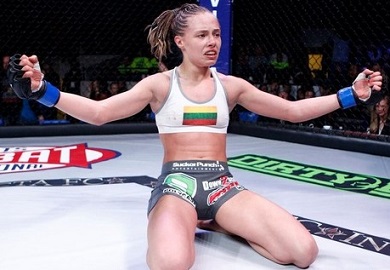 Earlier this month, UFC President Dana White said that the promotion found “The next Ronda Rousey” on TUF 20.

Rousey believes that the fighter White was talking about, is 2-1 Rose Namajunas.

Rousey spoke with media members in Brazil about her pick.

“I definitely think it’s Rose Namajunas. I called it from the very beginning. As soon as I saw her, I said this girl is special. I’ve been following her for two years. I wish her all the best, and I can’t wait to see how she does in the season.”

“She’s bound to be successful. She’s got an amazing skill set. She’s an exciting fighter. She takes risks. She’s gorgeous. And she’s charismatic. I really think she has all the tools that are needed in order to be the next really influential champion.”

The winner of TUF 20 will be crowned the UFC’s inaugural strawweight champion.

Who do you think will win the season and the strawweight strap?