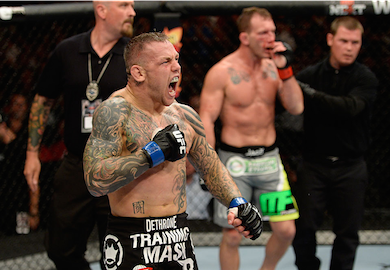 A lightweight bout between Ross Pearson and Al Iaquinta is the latest addition to November’s UFC Fight Night 55 event in Sydney.

Ross Pearson (16-7 MMA, 8-4 UFC) was last seen in action in the co-main event of August’s UFC Fight Night 47 fight card in Maine, where he knocked out former title challenger Gray Maynard. Prior to that, “The Real Deal” suffered a terrible judges decision loss to Diego Sanchez at June’s UFC Fight Night event in Albuquerque.

Meanwhile, Al Iaquinta (9-3-1 MMA, 4-2 UFC) is coming off an impressive third-round TKO victory over Rodrigo Damm, which he earned at last month’s UFC Fight Night 50 event in Connecticut. That victory marked Iaquinta’s fourth win in his past five fights.