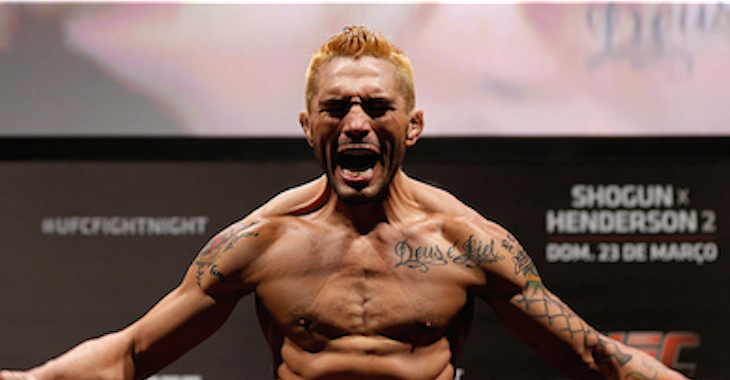 “It was a surprise. I never in my life thought something like this could happen. I’ve fought for the UFC 10 times: three times in TUF, and seven more fights after that. I’ve never used inappropriate methods to make weight. I always make weight. Making weight is one of my biggest concerns. I know it’s a great responsibility we have, and the UFC has high expectations in that regard. I worry more about my weight than the actual fight. I train and get ready far in advance. I’m talking to my doctors to see if there’s a possibility this was caused by the medication I was taking for my ankle. I was feeling a lot of pain before the fight.

“I’ve felt slighted by the athletic commission (CABMMA) before, from my fight against Robbie Peralta. This is the second time. This is a big headache. I’ll appeal without a doubt. I’m already putting my lawyers on the job, so we can appeal this. People who know me, know that I don’t use anything. I’m not addicted to anything; I don’t smoke marijuana or use steroids. I’m appealing. My understanding is that my failed test showed a masking agent, so I’m undergoing blood testing to show that I use nothing. I’m very honest in everything, especially in regards to my work.”

Just announced earlier today that he failed a drug test, Rony Jason is already on the move to clear his name. He told MMAJunkie that he will definitely be appealing the suspension because according to him he did nothing wrong.

We will keep you posted on any more details about his failed test.