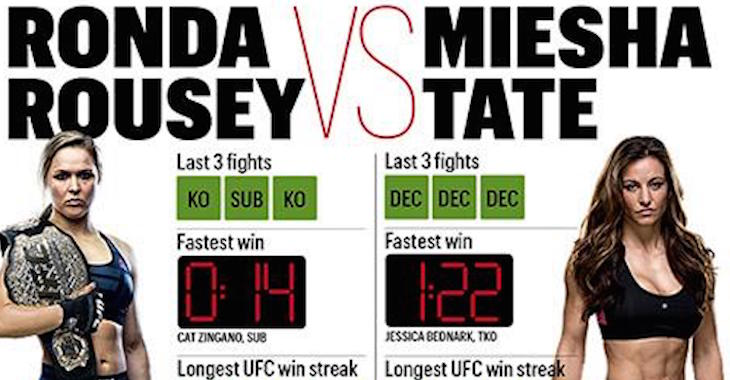 Ronda Rousey and Miesha Tate are expected to meet for a third time in the near future after the champion successfully defended her championship on Saturday night at “UFC 190”.

Since her last meeting with Tate at UFC 168, Rousey has knocked off four challengers to her championship in less than three minutes COMBINED. Her stock has risen tenfold with each championship defense and a loss to a top contender like Tate would be a major blemish on her perfect record.

Tate is also riding a wave of momentum into this championship fight as she is on a four fight win streak. While the caliber of her opponents are less impressive, Tate has shown improvement in each of her fights and is now sporting a more aggressive style that could clash with Rousey. Check out a side-by-side statistical breakdown of their upcoming championship fight below:

Who do you think will come out on top when they finally square off? Share your thoughts in the comment section below!