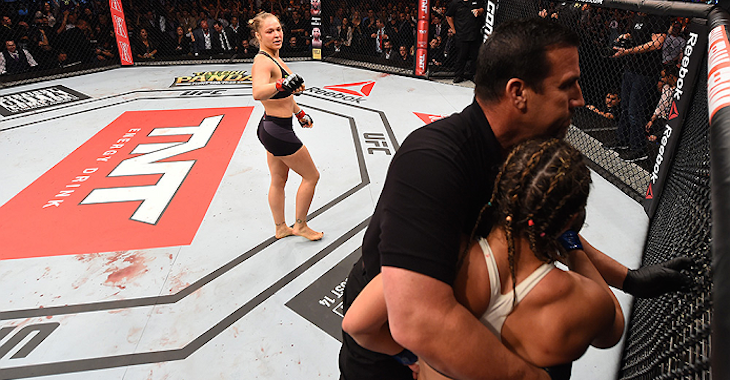 Ronda Rousey’s knockout over Bethe Correia wasn’t only special because it happened in less than a minute. Rousey wanted revenge for all the trash “Pitbull” talked and got it in the form of a face-plant knockout.

After months of trash talking Rousey’s friends and family, Correia finally faced off with the UFC Women’s Bantamweight Champion last Friday at the weigh ins. In a last ditch effort to intimidate the champion and sell PPVs, “Pitbull” repeatedly yelled, “DON’T CRY” at Rousey.

After Rousey sent Correia tumbling to the canvas face first at “UFC 190”, Rousey admits she repeated the same words to the challenger.

“I said the exact same thing she was saying to me at weigh ins,” Rousey said during the post fight press conference. “You know, she was screaming in my face at weigh ins. She was saying, ‘Don’t cry’ So I turned around to her after I knocked her out and I said, ‘Don’t cry.'”

Will Correia eventually make it back to the top of the division for a shot at revenge, or is thirty four seconds all she will ever get? Share your thoughts in the comment section below!