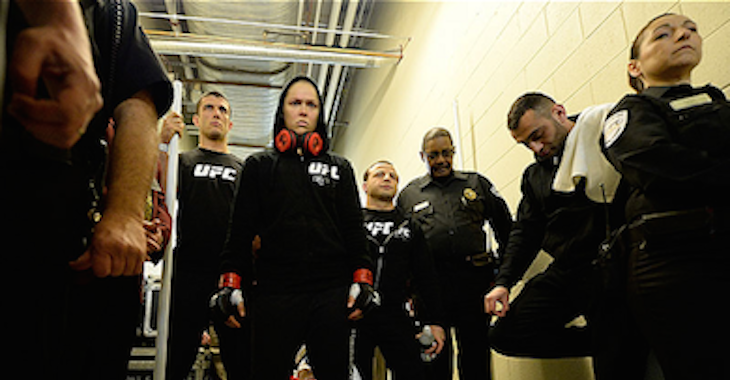 UFC champion Ronda Rousey is known for a lot of things, including her walk-out song, Joan Jett’s “Bad Reputation”. Rousey talked to Marc Myers from The Wall Street Journal about her song and how it came to be.

“Lots of professional fighters want their walkout song to sound like the “Rocky” theme—you know, regal and inspiring. I’m more on the theatrical side, so I needed something gritty, with a lot of attitude.”

“My walkout theme used to be “Sex and Violence” by the Exploited, a Scottish punk band. It’s loud and brash, and the title’s words are pretty much it for the song’s lyrics.”

“Then in 2011, I was fighting with Strikeforce, when Showtime wanted to air my bout on its late-night premium channel. That was a big break, but Showtime thought my song was inappropriate.”

“It was hard to choose a new one. I tried some Rage Against the Machine songs, but none of them felt right. Then my godfather’s son suggested Joan Jett’s “Bad Reputation,” from 1981. I had just heard the song on my car radio in the parking lot of the Palms Casino Resort in Las Vegas.”

Rousey will fight Bethe Correia at UFC 190 in Brazil and will once again put her undefeated record on the line.