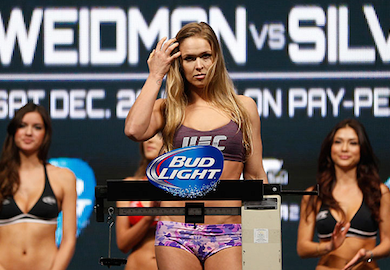 “Do I want to have 57 of his babies? It’s true. I think he’s married, though, so I’m not allowed. He was like my first real exposure to MMA. Manny and Karo I would see little bits of their stuff; I didn’t know it was like a real thing. I would see Karo putting on his Heat shorts and boxing in front of a camera, while I’m sitting there in my Judo gi while everyone else is doing Judo, and I’m like ‘Guys, Karo is over there boxing in his underwear. It’s really weird.’

“So I never thought of it as a real thing, until a couple years ago a friend of mine showed me a Fedor Emelianenko highlight, and it just blew my mind. And I was like ‘That is just the most amazing thing I’ve ever seen in the whole world and that guy was just so cool.’ And so he’s always been my image of what MMA is supposed to be, and what it really is. I will always be not so secretly in love with Fedor Emelianenko.”

“And he’s the only big MMA star I haven’t met yet. That’s OK because if I did I would probably turn 19 shades of red and then faint. And then hope that he never read any of the comments that I made. Man, I hope they’d didn’t translate any of that into Russian and send it your way.

During yesterday’s UFC 170 media event in Los Angeles, Ronda Rousey discussed her MMA crush and it’s none other than Fedor Emelianenko.

Anyone surprised by Rousey’s fanship of ‘The Last Emperor’?