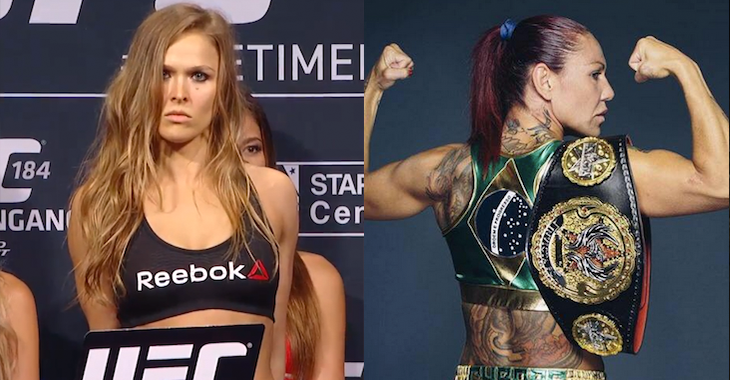 Ronda Rousey has quickly become one of the top stars in mixed martial arts today. Her thirty four second knockout of Bethe Correia at “UFC 190” on Saturday night caused diehard and casual fans of MMA to go into a frenzy, and we probably haven’t seen the best of her yet!

Before Miesha Tate and Jessica Eye’s meeting at “UFC on FOX 16″, it was rumored that the winner would be next in line for the UFC Women’s Bantamweight Championship. With Tate and Rousey coming out on top of their meetings, they will be meeting for the third time in their careers.

After UFC 190’s conclusion, Rousey was asked whether or not she wanted to face Cyborg or Tate next. “I prefer to fight who makes weight and doesn’t do drugs,” Rousey responded. “If that’s what the fans want, beating up Miesha is good for both our careers. I’d like to be on the Aldo – McGregor card, but it’s up to the UFC.”

“She can fight at 145 pumped full of steroids and she can make weight just like everybody else without them.”

Rousey is referring to Cyborg’s failed drug test of 2012 where she was popped for anabolic steroids. Do you think we will ever get to see Rousey and Cyborg settle their rivalry in the octagon? Share your thoughts in the comment section below!