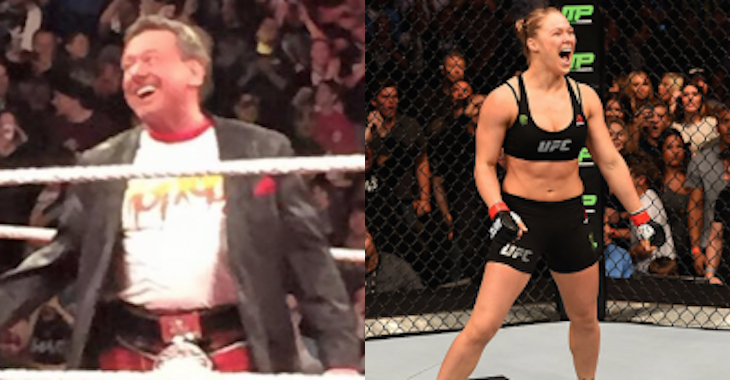 Sad news just recently hit the web, reporting that pro wrestling icon ‘Rowdy’ Ronda Rousey has passed away at the age of 61.

Piper was defiantly one of the best in the wrestling world, but he also had major ties to MMA. The name ‘Rowdy’ for instance can be seen and heard tomorrow night, as it’s the nickname of UFC bantamweight champion Ronda Rousey.

Last year, Piper did an interview with Fightland.vice.com and told the story of when he gave the ‘Rowdy’ moniker to the future champion.

I was trained by, at the time, the toughest man in the world. Not according to him, either. His name is “Judo” Gene Lebell and he trained Bruce Lee, Chuck Norris. He’s the godfather of MMA. He’s about 80 years old. He still has a dojo in Burbank. When I was 17, 18 years old [wrestling] in the Olympic Auditorium, I ran into him. I was getting beat up pretty good and he took me under his wing.

So then maybe a year ago-ish (my timing’s not great), Ronda and Gene called me. She was so, so excited and so beautiful, saying, “Would you mind? I’ll make you proud and I’m giving it everything you got.” And I said, “You go, gal. You go!”