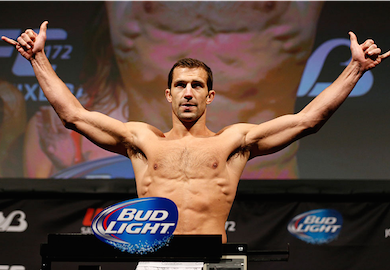 “I think [a title shot in 2014] is definitely a possibility. I want to get the belt, but I don’t want to be a paper champion. There’s a guy that beat me, and I feel like I need to beat him to be the best in the world. I’d definitely like to return the favor. Whenever that guy comes back, that’s who I’d prefer over everybody.”

“That loss to Vitor was probably one of the best things to happen to me. It gave me perspective and it really made me rethink my style and where I’m best. If I rush things too much, I take unwarranted shots. Whereas, if I wait and relax and find my range and let the fight come to me, that’s when I’m like a sniper. I know my striking is up there with the top [fighters], and I believe my wrestling and jiu-jitsu are, as well. When I’m relaxed, everything works better. I was a little nervous in that fight, and I tried to rush things at first. I finally started to relax, and then out of nowhere came the kick. Losing makes you rethink everything and focus on how to be your best. That’s what I’ve always done. The last time I lost was in 2007, and I went on a nine-fight win streak and won the [Strikeforce] belt. That was a big step, and now this is the next step.”

In a recent interview with Sherdog.com, UFC middleweight fighter Luke Rockhold discusses his ongoing mission to rematch Vitor Belfort and explains exactly why.

Do you want to see the rematch?