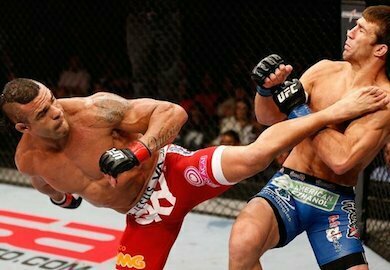 Despite being on the wrong end of a vicious wheel kick KO, Luke Rockhold still has been calling out Vitor Belfort and stating that he doesn’t stand a chance against Chris Weidman when the two are set to meeet in December.

“That’s a perfect world right there,” Rockhold told Submission Radio. “It would be awesome and we would really sell the fight, ’cause there’s a couple of people I can shit about. I don’t really like to talk shit about a lot of people, but there’s a few people. There’s Bisping and Vitor are definitely my targets, and I would sell the shit out of that fight, and then I would beat the shit out of them too.

“There’s nothing I want more than to fight Vitor Belfort. You know Vitor can talk all he wants, I mean he’s not even on this planet. The guy just, nothing makes sense that comes out of his mouth, and his whole life is a lie. I have fun, yeah. People wanna call me a ‘Playboy’, I like to enjoy myself. I’m young, I’m single, travelling the world and having a good time, but you know I handle business when it’s time. Yeah, I wanna fight Vitor, more than anything.”

“He’s gonna be a lot different fighter, you know. Who knows what he’s gonna be like, but I just don’t think he’s gonna have much for Weidman. He looks old and he looks like he’s got a chicken neck now, so I don’t know.

“He looks tiny! I don’t know how he’s gonna keep the weight on, ’cause he was on UFC on Fox, man the guy looked tiny. He literally looked like a small welterweight.”