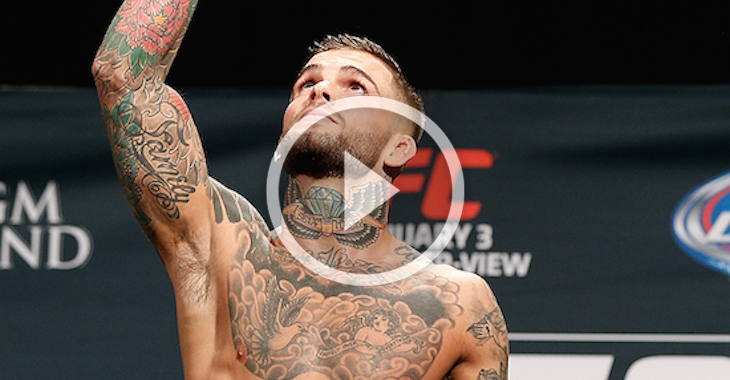 Give McCall ‘No Love’

It seems as though the bad blood between UFC flyweight Ian ‘Uncle Creepy’ McCall and basically all of Team Alpha Male is still alive and strong. The feud resurfaced on the latest episode of Stud Show Radio when hosts Justin Buchholz and Chris Carlino aka Sir Studboy, along with a few special TAM guests, watched a recent interview of McCall where he calls out Joseph Benavidez, trashes the team and recalls the moment before his last fight when a group of TAM fighters distracted him before he entered the cage to fight.

McCall already lost to Benavidez and Buchholz, who has been a longtime member of TAM, has a better idea for who he should fight next.

“You know who would beat your ass more than Charlie Valencia did? Cody ‘No Love’. Joe Benavidez already did, he’ll do it again.”

“Joe already took care of this guy. Have him fight Cody, that’d be good. He’s been in the UFC longer than Cody, it will be Cody’s second fight, it will be a perfect Alpha Male guy to get your revenge at, so let’s make that fight happen. Joe already beat you. You’re coming off of a loss here, challenging Joe who already beat you. Lets go with Cody.”

Cody ‘No Love’ Garbrandt has already been vocal about his desire to fight McCall, saying that he would make the drop from bantamweight just to meet Uncle Creepy in the cage.

What do you guys think, a rematch with Benavidez or would you like to see McCall take on Garbrandt? Sound off in the comments.