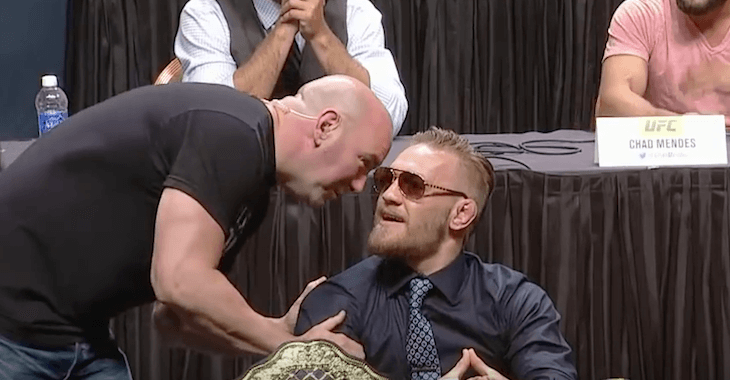 Did you happen to catch that moment during the UFC’s ‘GO BIG’ press conference where Dana White leaned over to Conor McGregor and whispered something in his ear?

Well a lot of people did and since it was right in the middle of McGregor going off on just about every other fighter there, many speculated that White was telling him to calm down, or to let other fighters talk more.

Turns out it’s something way funnier.

During the post-fight press conference for UFC 191, White was asked about the moment and White quickly decided to clear the rumors up and tell everyone exactly what he said to Conor.

“He was jumping up talking sh*t to everybody and his zipper was down.”

For those conspiracy theorist out there who might not take White for his word, here’s a clip of the moment. If you watch closely you see him lean in and say something. If you are decent at reading lips you can see it does look like he says your zippers down. Then, what do you know, McGregor looks down, then puts his hands under the table before the camera pulls away.

I think it’s a safe bet to take White’s word on this one.