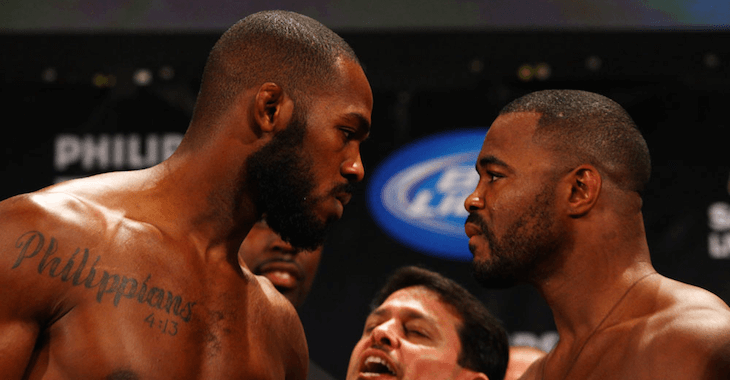 Rashad Evans is preparing himself for war with Ryan “Darth” Bader in what could potentially be a title eliminator. “UFC 192” will host the light heavyweight clash and the only thing that could be keeping Evans or Bader from getting a shot at gold is the unexpected return of Jon “Bones” Jones.

“Bones” was stripped of his championship after his run in with the law in April. The former champ allegedly fled the scene of a three car wreck which he caused. A pregnant woman was injured in the crash and she apparently saw Jones flee the scene of the crime, come back only to grab money and leave again.

Jones was suspended indefinitely by the UFC until he sorted this mess out, which could happen as soon as tomorrow. “Bones” and his team will appear before a judge in New Mexico on Tuesday for a plea hearing that could bring this all to an end. Evans recently spoke with Fox Sports about his beef with Jones and how he truly feels about the situation:

“It’s kind of a sad situation for me honestly. My heart really goes out to Jon because despite us having our beefs and everything, I care about Jon as a person. I think when this journey’s over and said and done, I hope we can all grow as people and look back and say we had crazy years training together and fighting together.”

“I don’t wish the hardships that he’s going through on anybody. To have a drug problem like he had or be in a situation like he is in right now because it’s a serious thing because it tears down so many people around you that care about you. The hardest thing in the world is to watch someone you love really not be able to get themselves together and really struggle on a level so bad when it seems and it appears that they have it all.”

Do you think Evans could get the next shot at the title if he wins his fight with Bader? Who is more deserving right now? Share your thoughts and make your predictions in the comment section below!