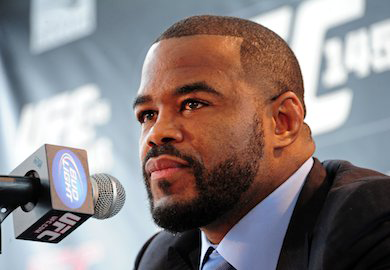 “If I ever did anything like that, it would be after I finished fighting, and I’m not gonna (sic) be done fighting for at least four years. I had a million people asking me if I was retiring for wrestling, but honestly speaking, if I didn’t get seriously paid to do it I wouldn’t do it,” Evans said. “I think it would be disrespectful to my legacy in the UFC if I didn’t do a deal that would make sense where I got paid! Besides, that s**t is harder on my body than fighting.”

In a recent statement to MMAMAnia.com, former UFC light-heavyweight champion, Rashad Evans shut down the recent rumors of a move to pro-wrestling.

Sorry Wrestling fans, we get to keep ‘Suga’ a little while longer.