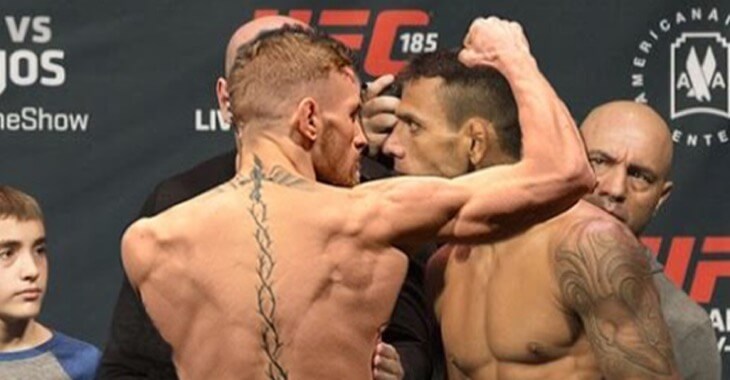 All roads lead to champion Conor McGregor if your in the featherweight or lightweight division.  What’s worse?  He knows it.    There isn’t a an instruction guide or “how to” booklet that you  follow when you go from fighting in front of a few hundred people at 8 bucks general admission to being one of UFC’s biggest stars pulling in serious PPV income.

The Notorious one just does what he wants, depending when you ask him.   McGregor has made comments prior to UFC 194 against Jose Aldo and has stated that in two fights he’ll be a two division champion.   Has the featherweight champion gone against his word?

Check out the photos below, McGregor’s “beg me” taunt and Rafael dos Anjos response to it. Not a bad response from dos Anjos considering it’s McGregor wanting the champs LW strap.   Will McGregor pull the trigger on the answer to the question most fans want answered?   Will he defeat dos Anjos to become only the third two division title holder behind BJ Penn?