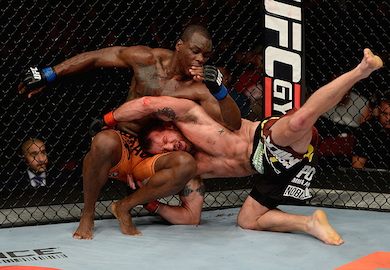 Following the bout, UFC’s finest took to twitter with their reactions.

Boring is all I have to say!

Anyone else catch the corner man bitch slapping the other corner man? Can we get this guy an award?… http://t.co/3Vsv2tFXO8

Gruelling fight that was. #UFCFightNight think bader got it.

OSP's corner man should get "move of the fight" with that "b***h shut up" backhand! #UFCFightNight

OSP's cornermen just karate chopped the other cornermen in between the 4th and 5th round. WTF! Did you see that?

Bader looking solid through 4. @aaronsimpson has him coached up well with his transitions. #UFCBangor #UFCFightNight47

If OSP would use more basic combos I think he could do a lot better.