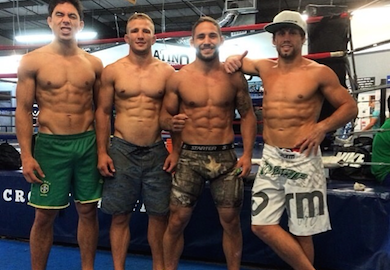 Yesterday in the main event of the preliminary card for UFC 178, Dominick Cruz made his triumphant return to the UFC by TKOing Takeya Mizugaki in just 61 seconds.

During his post-fight Octagon speech, he said he was looking forward to beating up more “Alpha Fails.”

His insult was aimed at Urijah Faber and his team, which is named “Team Alpha Male.” (Watch the speech HERE)

Team Alpha Male took to Twitter to fire back at Cruz for his comments.

Negativity continues 2 boil over 4 Dom. Guys itching 4a whoopn, if @TJDillashaw gets 1st whack DC will only have losses 2 one team AM @ufc

I thought the "alpha fail" comment was funny. Nothing wrong with a good rivalry. Cruz is fun to watch. TJ's gonna beat him up.

Cruz was able to fire back at Faber for his comments on the Fox Sports 1 post-fight show (Watch his response HERE).

During the post-fight press conference, UFC President Dana White stated that Cruz would be fighting TJ Dillashaw next for the bantamweight championship.