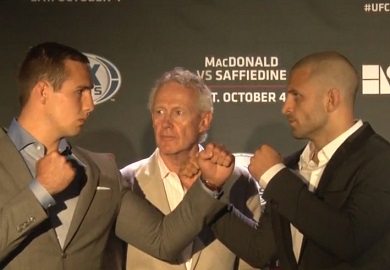 Last night Rory MacDonald fought a very game Tarec Saffiedine in the main event of UFC Fight Night Halifax. The bout ultimately ended with MacDonald landing a devastating uppercut in the third round, stopping ‘Sponge’ for the first time in his career.

Below is a compilation of UFC fighters reactions to the bout:

Er hello, your about to fight, might wanna stretch or warm up a bit lol. Just kidding #coldasice

Tentative first round. 10-9 McDonald. Nice kicks from Tarec towards the end though.

10-9 McDonald. Beautiful jab by Rory. Establishing his range now, look for him to follow it up and look to finish as the fight wears on.

Awesome finish by @rory_macdonald: cross uppercut combo and then GNP from behind. Beautiful! @UFC_CA #UFCFightNight

@tarecfighter I KO you the same way in practice remember??