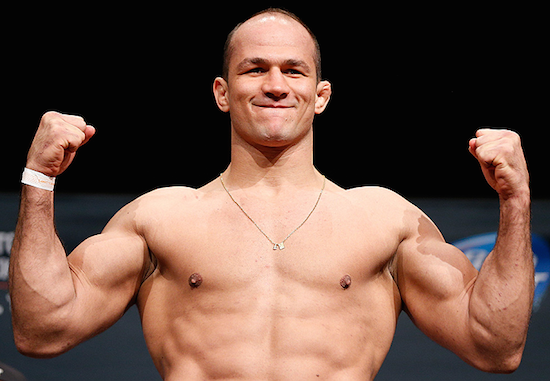 At UFC on FOX 13 last night, an incredible night of fights was capped off by a 5-round war between Junior Dos Santos Cigano, and Stipe Miocic that ultimately saw JDS given the nod by all 3 judges in what some are considering a controversial win for the former champ.

Below is a compilation of Tweets from fighters watching the event.

JDS backing up with his hands down is scaring me #UFCPhoenix

What a fight so far! Miocic just needs to keep a hand up when going after JR after he hurts him. #UFCPhoenix

Fuckers got some jaws on them to shit! My kind of fight @junior_cigano @stipemiocicufc

This fight reminds me of why Cain is such a dominant heavyweight. His cardio is out of control

Goldberg wanted change of momentum there you go #dickkick

This is gonna be a fight decided in the 5th! #wheresyourheartat

How have their faces not fallen off?

This is the best fight I've ever seen @stipemiocicufc FTW!!!!

Amazing fight! Huge performance by Stipe regardless. Showed he is one of the best in the world!

Stipe just got robbed in a dark ally

What a great main event to end a weekend of fights. Miocic is a warrior but I still had JDS winning.

5 round fights judges mostly remember the last rounds jds dropped him in the 4th and was more active 5th! Great freaking fight tho!!!!!

Amazing @stipemiocicufc you're a warrior! 49-46 was bull. @cainmma then JDS and Stipe. My top three heavy's.